The need for a modern museum, worthy of the century-long history of Boeotia, led to the radical reconstruction and expansion of the old building, along with the full-scale renewal of its exhibits with objects coming mainly from recent excavations. The new Archaeological Museum of Thebes occupies an exhibition area of 1.000 m2  and houses a multitude of artefacts, representing millennia of continuous human activity in Boeotia. The exhibition halls spread over two different levels, a choice dictated by the necessity to maintain the natural formation on the western slopes of the Kadmeia hill.
The exhibition is arranged in a total of eighteen sections, eleven of which follow a basic chronological order from the Paleolithic period down to the end of the Ottoman rule (nrs. 3 -14 ); in this way, they illustrate over time culture, everyday life, political and social evolution in Boeotia. The first Neolithic settlement cores (nr. 3 ) were replaced by the technologically advanced settlements of the Bronze Age (nr. 4 ), the end of which witnessed the prosperity of the Mycenaean palatial centres of Thebes and Orchomenos (nr. 5 ). There followed a period of introversion and transformation (Protogeometric and Geometric times, nr. 6 ), which led to the Archaic period and the creation of the Boeotian Confederacy (nr. 7 ). The Classical times marked the time of Theban domination (nr. 8 ), while the incessant military conflicts of the Hellenistic period impoverished the area (nr. 9 ), and gradually led to its marginalization (Roman period, nr. 10 ).
Prosperity returned during the Early Byzantine (nr. 11 ) and -later on- the Middle Byzantine times (nr. 12 ), when Thebes was the designated capital of the ‘Theme of Hellas’. During the Late Byzantine period the area passed under Western overlords, and formed part of the Duchy of Athens with its seat in Thebes (nr. 13 ). The journey into the past is concluded with the period of Ottoman rule in Boeotia ending with the foundation of the modern Greek State (1830) (nr. 14 ).

Particular sections relate the history of the Archaeological Museum of Thebes and the early archaeological research in the region (lobby-reception, nr. 1 ), the myths associated with Boeotia (nr. 2 ) and the cultural radiation of Boeotia from antiquity to modern times, with a special reference to the tragedies of the Theban mythological cycle (gallery, nr. 15 ).
The gallery functions also as a short circuit for the visitor with limited time; furthermore, it leads to the covered archaeological site at the foundations of the Museum (nr. 16 ). The site preserves part of a dwelling from the third millennium, tombs of the 17th century BC, and the foundation of the Mycenaean wall of the Kadmeia (13th c. BC). These monuments are partly visible in the exhibition hall of the Archaic period (nr. 7 ).
A showcase at the gallery accommodates a tactile and educational collection, including selected antiquities (nr. 15 ). Specialized programs for school groups take place at the area of educational programs (nr. 16 ).
The visit is supplemented with a tour of the court where stone monuments are exhibited, such as funerary stelai, inscriptions, statue bases and funerary lions (nr. 17 ), and concluded by a visit to the medieval tower (nr. 18 ).
The exhibition was designed to be accessible to disabled visitors and cover the aspirations of a versatile public with diverse demands. The visitor has the opportunity to navigate through time in the centuries-old history of Boeotia by way of singular finds, digital applications, reconstructions, but also by way of the monuments themselves, such as the tower and the structures at the foundations of the building. 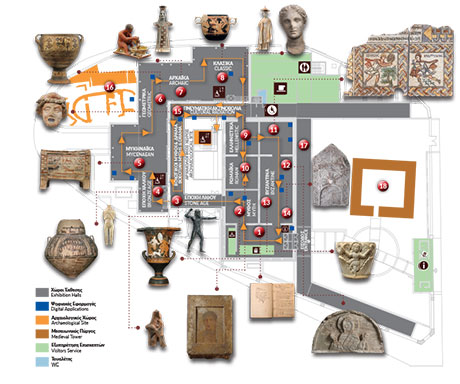 Archaeological Museum of Thebes. History goes on....
The stone wall around the Museum with the wrought iron door of the first incarnation of the Museum still welcomes the modern visitor. The cypress shown in the 1910 photo still casts its refreshing shadow on the century old courtyard of the Museum.
Ticketing  |  The building  |  Access